The California State Treasurer says that HSR does not pencil out. He's right. 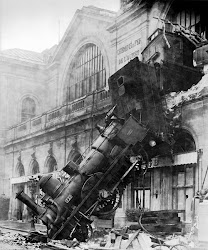 Not knowing when to stop

"It's not about the train; it's about the money."